Heroine Rumble is a 3D action yuri/futa wrestling game where you try to out sex each other in the ring. You have total control over your character(s). Train her stronger with the Lewds dropped by enemies or from winning matches, fill her repertoire with all kind of lewd moves, dress her up to your liking, or even transform her body with unspeakable lewd methods. And finally, decide her fate.

Recommended to play the web version on Chrome, but it should work on Firefox as well.

It is a 3D game and it may take a while to load all the assets. If it freezes, try reloading the page.

Game window size and controls are customizeable in-game under options.

Offline version is available at Patreon.

There is also a game play guide here.

Will there be a android version?

Why what a hell COM continuously trying rip clothes if SFW is trigger on??? Just finish her!!!!!!!

i tried running the game in multiple browsers and nothing is working, the game keeps getting stuck loading at different points and i waited like 20 mins for it to load.

So, I finally beat the goddess challenge, is the screen meant to go black after? Kinda scared that I have to restart

I'm playing this on xbox with keyboard and mouse so hopefully my game won't be as laggy. Edit: Never mind, it's refusing too play now. it worked before but i made the graphics a bit too high then it crashed lol

Can you download this i just downloaded your other game

How can i play without flash

It's not working in my phone😭😭😭

its not playing form me (chromebook)

its should work on chrome its working for me.

Asset 159 must be pretty big to take this long

the piledriver is missing in the prices that you have mi in your game.

If this is getting updated then could you make so that your character can be a futa as well? thx

Pro tip: Turn off any add blockers or cookie blockers in order to keep progress. I think people have already commented this but just wanted to set a reminder.

Overall, this game is pretty fun and the fights are hot. Love the futa option.

"There's boss fights in this game?"

"Aight bring it on"

I think Lucia is pretty difficult even for that point in the game. After awhile I was barely able to win, but was "only" level 24. Sure she might have high stats and farming would've helped, but l think it has a lot to do with how fast she reacts and attacks, so you can get stuck in a loop where it's hard to do anything. Similar to the expert opponent in practice mode. I had a much easier time in the fight with Emerald afterwards.

However Lucia is easier in SFW mode since she still tries to rip your clothes off but can't, so she can't use her H attacks either. It just might take a little longer to win. Also I played again and got lucky enough to learn the Thrust and Pounce moves from the trainer which can help a lot. Still for the challenge fights it seems like you pretty much have to farm. Even the watch AI couldn't beat the first one.

Would've been good to know:

-Sometimes grabbing a knocked down opponent doesn't work like if they are about to recover (even if they haven't moved yet) or if you can hear them crying or their heart beating (have to wait a few seconds). If you try to grab too late or miss the hit box then you can get countered or even knocked down. But of course grabbing is usually no problem for the AI.

-The yellow space in the escape meter can be so small sometimes, and even if you stop it when it's in the yellow it doesn't always seem to work. In fact it seems to work better if you stop it at the start of the yellow range or even just before. Regardless you might be better off just letting the meter fill with auto escape turned on.

To those having issues with the desktop itch download of this game, I also had issues with it loading and getting stuck.  Playing it on the itch website fixed the problem.

Where do you get the full version?

If it's a chrome problem, I don't know

want to try Version 2, i have to pay but it's in a different currency and don't know how to do it

Is there a way to save data? I played this game for a bit and I don't want to lose my progress. I don't see an export save button, is it saved automatically?

Yeah no autosave, just lost everything

i still have my stuff

It may be because I play in incognito mode, other games usually allow you to download your dat

why is there 163 panties

Can you make other wrestling games without sex??

Reply
The guy who gives reviews on games2 years ago

-That one game reviewer

how to start the game? Only black screen is appearing . is it something to do with flash update ??

Heroine rumble is the best.

Aw... I had to clear browser data to fix an issue in Firefox and it ended up wiping my almost-level-50 fighter. Are there any cookies or files I could edit to store that, or is it back to square one? I was almost ready to try the challenge fights.

Very good game, but it would be nice if sex toys were included

for example letting the characters use strapons when futa is turned off, or having characters able to carry vibrators and massagers

on blogspot he says his wish is fulfilled or likes ps4, being able to jump from the end of a pole takes effort and he doesn't have any information

Play online for free but you better fucking pay if you wanna download it for offline use!!

how the hell do I do to play on cell phone why when the game loads and I press the green button the game doesn't answer me Or do I have to have a keyboard and so on?

How do I save my computer process since I left and everything was erased, or is it because I didn't have a profile? 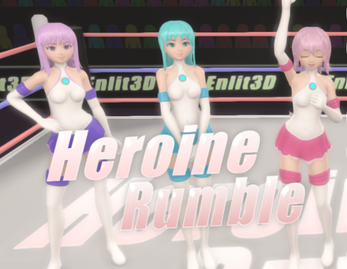